How could I leave her?

I always wanted people to see me the way I felt down deep. I felt loving and nice. But that’s not the way the world saw me. “You just think you’re tough,” was the words I most often heard. It was clear I was not reflecting the longing of my heart.

So what was the problem? It took years for me to see the obvious answer.  I was too afraid of getting hurt and being rejected to let myself love freely.  How did I get that way? From past hurts and past rejections. Is anyone relating to this yet? I believe we are all different yet all the same. We all are affected today because of wounds in our past.

I got so tired of wanting to be free but living in a box. I wanted to love without hesitation. I loved Jesus and I wanted Him to love through me. “God, please fix me,” I cried. “I want to experience the rivers of living water you talk about in Ezekiel 43.” I didn’t hear an immediate answer but He had a plan ready and waiting.

God has the greatest sense of humor, you know. A friend reminded me that I used to say, “God, I’ll go anywhere you want me to go but Africa.” So His plan was sending me to Africa.

I headed to Africa to begin production on Walk With Me, a tv show about God and His friend Heidi Baker of Iris Global. Soon after arriving, I met Mama Tima, an elderly widow and longtime friend of Heidi’s. She lives in the village next door to Iris in a little “home” Iris built for her. Even though we don’t speak the same language I loved her immediately.

On our second trip to Africa last summer, going to find her was first on my list. I had thought of her often and was anxious to see how she was doing.  I also wanted her to be featured in one of our episodes. During our on camera interview with her through an interpreter, she told us how Jesus had appeared to her in a dream. She was homeless and starving at the time. In the dream, Jesus came to her and gave her bread and asked her to follow Him. He told her to go to Pemba where someone would find her and take care of her.  She said yes to Him and the rest came to pass just as He told her.

Not long after this interview, Mama Tima became very ill. She was so sick that Heidi went to see her to say goodbye.  I wanted to make her as comfortable as I could so I made potato soup on a camping burner with vegetables I was able to buy in the village market. I delivered  the soup and found her laying almost lifeless on a straw cot.

Now here’s the part of the story that will sound a little crazy but it’s the truth. This was the big moment that God was giving me that could change my life and unwrap the box — but I had to make the right choice.

Tima couldn’t sit up on her own. She couldn’t feed herself. How was she going to eat the soup? I made the soup because she couldn’t eat the rice and beans, the only food she had. I actually had a moment of slight panic. You see, I was not comfortable touching or hugging people. It was that fear thing again. I needed to pick her up off the bed and hold her in my arms like a child and feed her myself or walk away.  This was one of those moments when self talk was a good thing. “Get over yourself Sondra. Is Jesus alive in you or not? Let your heart love without reservation.”

I sat down on the cot and did what needed to be done. In that moment, the strings came off of the box and my heart soared like I had never experienced. I was free. I was really free. I went back the next day with more soup and sat on the cot. I went a third day. And then,  Tima recovered. A few days later, she and her family honored me by getting dressed in their best clothes for my last day in Africa. It was also my birthday. The most glorious birthday party I have ever had. They gave me a Kapalana (their version of a skirt) with hearts printed on it to seal the day. Tima and I both cried when I left. 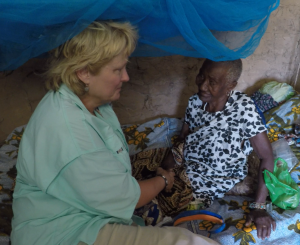 I have heard Heidi say many times, “the poor made me rich.” I finally get it. I know what she means now.  Mama Tima will always live in my heart. God used this little woman, IN AFRICA, to set me free.

I’m back home now. I love to hug. I’ll hug you as much as you need. No fear. No reservations. Loving others because of Him is the greatest joy. Thank you God for hearing my prayer. Thank you God for Mama Tima. You knew I wouldn’t be able to leave her there.

A Trail of Hearts